P.G.S.E.Z. is located at km 13 of Shahid Rajaei Highway at the west of Bandar Abbas. It was established with the name of Mines and Metals Special Economic Zone on Jan. 14, 1998. Based on the decision made by the Council of Ministers, it changed to Persian Gulf Mineral and Metal Special Zone. On March 6, 2005 “Economic” was added and in early 2009, it charged into Mineral and Metal industries Economic Zone . The zone, with an approximate area of 5000 ha, is divided into 4 sites: southern, intermediate, northern and development sites geographically, 2000 ha of which is operational and investor companies are implementing or operating the projects in question, and 3000 ha more are preparing their infrastructures. The zone is bounded by Pouladi Mountains, the Eighth Persian Gulf Star and Hormoz refineries on the north, wharf for loading and unloading minerals and oil products on high waters and Persian Gulf on the south. Bandar Shahid Rajaei on the west and Tavanir 1200 MW power plant, the city of Bandar Abbas and the relevant railroads, have provided the distinctive situation. The purpose of establishment of the zone has been providing conditions for absorption of domestic investment and foreign and conducting them toward establishment of industrial and mineral units, energy- intensive industries, processing of minerals and economic growth and development, increasing job opportunities, increase and development of modem technologies in the field of production, managerial skills, improving the quality of products and increase in the export capability for the purpose of competition in Global Markets are among the objectives being drawn. The activities of the Co. began with operationalizing the southern site and construction of office buildings, fencing of the intermediate site, construction of road networks, public utilities, Persian Gulf five- star hotel, water declinator plants, overpass bridges to Shahid Rajaei axis and railroad, and with merger of Bandar Abbas Rolling Company(BARCO). and adjoining of mineral and oil products, loading and unloading wharfs, and establishment of the customhouse were realized by operationalizing the sites and at the present, considering the establishment of large industries such as steel, aluminum and other industries, the zone will turn into the hub of steel, aluminum and anode industries, mineral and oil products, loading and unloading and electrical power production. Establishment of more than 23 investor companies and about 9 Billion Dollars investment are evidence for the growth of those industries, revealing the capability and potential of the zone. Generally , vicinity to the target markets being adjacent and access to high waters and being adjacent to Persian Gulf and trait of Hormoz, access to the north – south and central Asian – Caucasus corridors , being adjacent to the largest trading port of the country (Shahid Rajai) , presence of nationwide railroad terminals and the ease of access to Iranian mines , presence of rich iron ores near the province vicinity to Bandar Abbas International Airport, being adjacent to Bandar Abbas 1200 MW power plant, being adjacent to oil refineries, passage of the nationwide gas pipeline across the zone, called “the peace pipeline” and obtaining a decision made by the government for transfer of gas to the zone, enjoying marine terminals for minerals with a capacity of 12 Million metric tons, and oil, with a capacity of 15 Million metric tons. In the near future, with implementation of the comprehensive project of the large port of the zone with addition of 8 new wharfs, the capacity on loading and unloading shall increase to 70 Million Metric tons. 2000 ha of land in the form of south, north and intermediate sites and 3000 ha land of the development site, has increased and established the total area of the region by 5000 ha. Being adjacent to Shahid Rajaei highway, enjoying Persian Gulf 5- star hotel, being adjacent to linking land, marine, air and rail lines for the purpose of easy access to export of the products, to linking land, marine, air and rail lines for the purpose of easy access to export of the products, numerous water desalinating plants, establishment of a special customhouse equipped with Asicoda global system, integration of steel, aluminum, power plants and marine infrastructures, all provided an appropriate background for investment. The objectives drawn for the zone have been planned based on the advantages available and it is planned to achieve a production hub for steel, aluminum and energy industries, loading and unloading minerals and oil products ,and 4 hubs for export, technology and employment in the country based on the steps being taken. 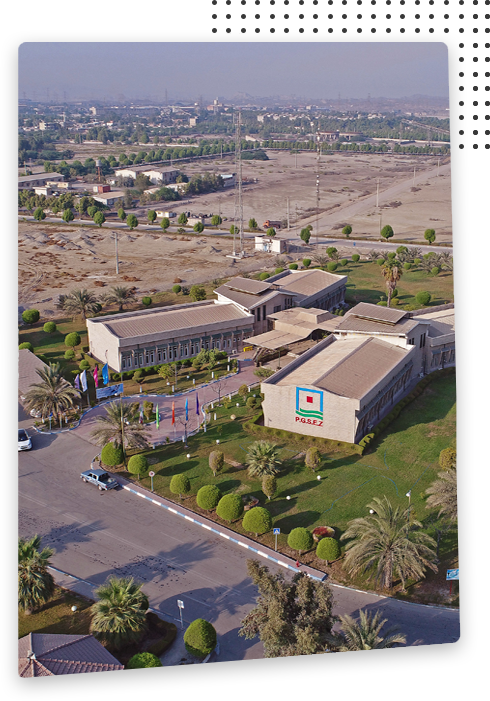